Attempting to document the events The Ghost shall be attending so that those interested can have a peek or ride along. This post will be updated regularly as dates change or events get added.

If you are interested in a ride-along, transportation, or want to stop by…feel free to message me. We are often also available to transport goods or offer rides to sites and depending upon distance, usually like a little help w/ fuel or trade.

Scott snapped these photos of us pulling out of the Fred Meyers fuel station after doing our full tank for the Nehalem Trip (see earlier post about Full Tank Fillup).

Thanks for sending them over Scott! 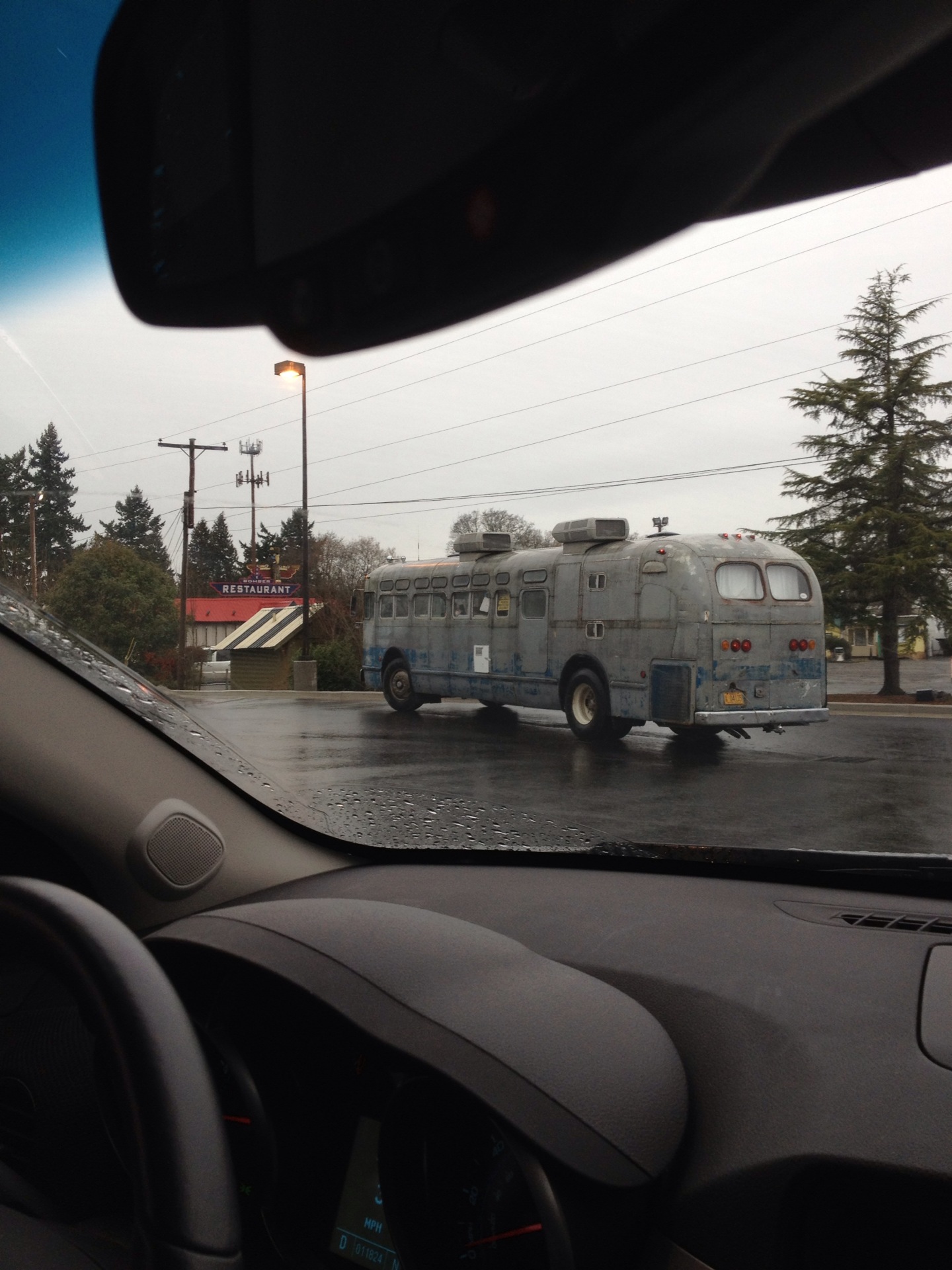 My mom and dad snapped these photos of Emily, Marley, and I climbing up Hwy 6 heading home last Monday. The ’78 Suzuki GS550 on the carrier on the back.

As always, if you have spotted The Ghost out and about and have some pictures for submission, send them over! I will have a contact me page up soon. 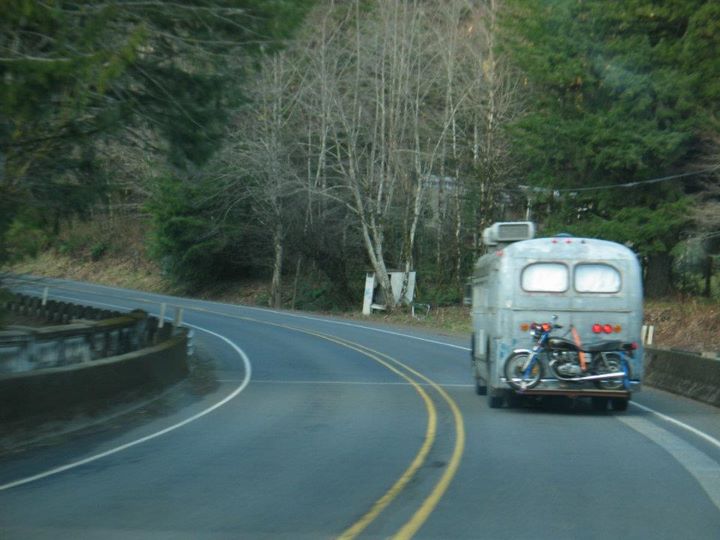 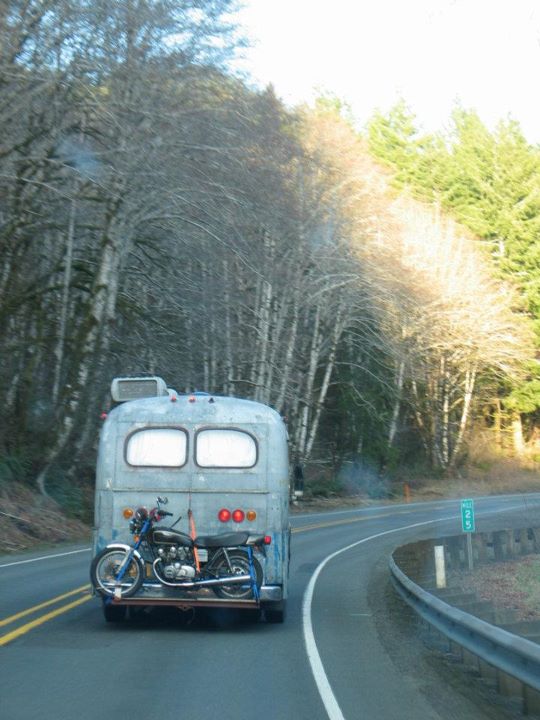 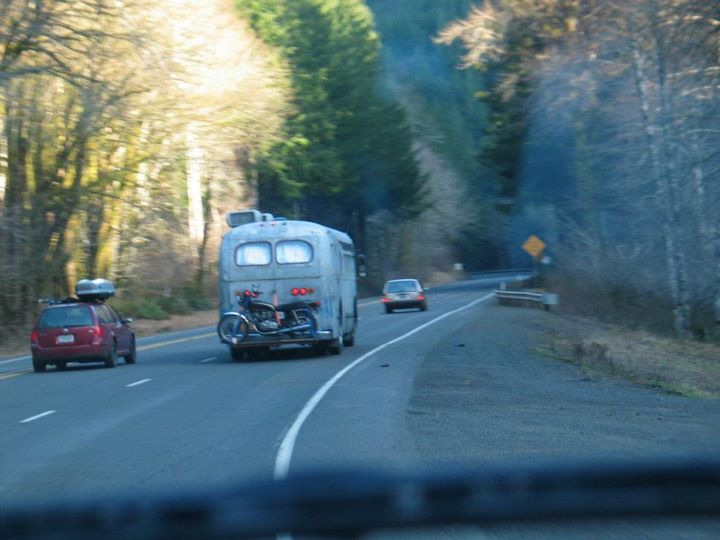 Haven’t seen one of these in awhile…

Filled the fuel tank to the tip top at Fred Meyers in Millwaukie, OR for $3.68 a gallon (that included our $0.10/pre gallon credit we had standing). Coach took almost exactly 60 gallons of fuel (in two fills).

A spendy fuel bill, but this tank will easily get us well into summer, including SOAK and this weekends campout at Nehalem Bay State Park.

Also beginning to think that the tank is not the advertised 100+gallons and more along the lines of a 75-80 gallon tank. Since I just had dropped the tank to do the cleaning service recently, I suspected <5 gallons remained in the tank. Then added 10 post cleaning and the 60 at the station. Strange, smaller than I expected.

Throwing together a little account of the trip to BRC. Tune in later for the story of the return trip!

It was Friday evening, mid afternoon, and my wife and I had spent the past two days packing and finishing up the last minute projects. Fresh off of the high of NorthWest Mog Fest in Sheridan, OR and the associated shakedown run for The Ghost, we were itching to get in the drivers seat and put some miles between us and PDX. The drive to Black Rock City, NV for the annual Burning Man festival usually knocks out at about 10-11 hours in a ‘normal’ automobile. In a ~20,000lb vehicle that can’t push much more than 65MPH without death shake in the steering wheel, we were expecting to burn a whole day.

Departed that evening and make it about 100 feet out of the driveway. Power loss. Serious power loss. Got out, lightly adjusted the governor gap, and continued motoring. (In retrospect, I should have suspected the fuel tank restriction I have been fighting!). We pushed through some light I-205 and I-5 traffic and headed South to Newberg, OR. We needed to drop off the chickens and grab the last items from the house (my bike, some LMR equipment, etc.) I took the opportunity (while we waited for the temperature to lower outdoors) to adjust the brakes and give a final pre-journey inspection. I needed to grease the cam points on the rear brakes to prevent sticking on takeoff (ongoing issue). After freaking out that the adjustment created a bigger issue , which it actually hadn’t, I gave us the green light on the chassis and we departed.

We screamed down the freeway at a cool 63MPH, engine temps good, overdrive operating as it should, and Marley meowing in her box. We were headed to Corvallis, OR to drop off the cat before heading south. About 10 miles before the Corvallis exit, we lost the ability to go into overdrive. Engine temp was hovering around 180F so we kept motoring on.

Once we reached Corvallis, we ate some dinner (thanks to Barbra) and I started checking out the transmission issue. I read quickly though the manual and troubleshooting section and found that overfull/low can cause overheating of the transmission. I inferred that overheating of the transmission could cause the control pressure to drop (out of the hydraulic governor) and thus drop OD out of the range of the engine RPM. Using their method, I checked the level and found that it was HIGH. The easiest way to lower the volume and keep it clean, I figured, was to remove a pressure line (only 45psi) and put it into a milk jug to catch a quart or two of fluid. So I found a suitable line, disconnected it, and put it into a jug. I started the engine and milliseconds later was douched with hydraulic fluid head to belt line, including the street/tree/bus/curb/grass around me. Fortunately I had kept my hand on the shutdown switch even while starting so I shut the bus off within 2 seconds of the fluid bath (thank GOD for the electric shutdown…the old version required at least 30-40PSI air to shut down!)

After a few hours of cleaning up, and deciding that what was all over the place equated to about 1.5 quarts of ATF, I took a shower, bathed my clothes in liquid dish soap/hot water mix, and loaded up. We had called ahead and determined that the Fred Meyers (of which we had a 10 cent to gallon fuel credit) stopped fueling a 1/2hr earlier. Since we had just acquired about 30 gallons of fuel in Aurora, we decided to motor on and see what was available out by the freeway. Heading out 34 towards I-5, the overdrive engaged and we tore south since fuel prices were >$0.15 higher than other establishments I’d seen closed. I motored until about 2:30AM when I decided to pull it over and catch some rest. By this time, we were a little under an hour down highway 58 headed towards Kalamath Falls, OR. I picked a wide turn-out and crashed out with Emily, who was already asleep in the back.

After a very poor couple hours of sleep, I decided to hit the road again while there was still some chill air at the low altitudes. I motored on, stopping only twice for issues (one the fuel tank screen plugging, the other the overdrive popping out (and thus discovering a small coolant leak in the investigation). Power loss due to fuel restriction is VERY irritating mostly because the bus slowly drops speed (usually when you need the fuel the most) and in some cases, comes to a halt and stalls. The fuel tank screen clearing process was simple, mostly because we couldn’t drain the tank and fix it properly. The on-board air system of the bus had a nice 80-120PSI outlet on the auxiliary air tank that I had a hose and air nozzle to do tire fills, cleaning, or fix this exact problem. I removed the pipe plug just tank side of the fuel inlet check valve and blew all the crap towards the tank and off the screen. Buttoned everything back up and kept on zipping along.

At about 7:45AM, a short distance out of K-Falls (near the lake) I was surprised with a loud POW and the engine racing at much higher RPM. After doing a mirror check, fluid spill check, and gauge scan, I found the next turnout and had a look-see at what happened. It appeared that something had broken in the overdrive system and kicked us out of overdrive, at speed, under load. This equated to a VERY abrupt sudden shift while 500+lbs of iron slinging around at 1550RPM raced to over 2300RPM trying to catch up. Thus…the bang. While I was doing my checks, I found that quite recently the lower coolant hose on the transmission cooler decided to start leaking again where I had previously sealed it up with some Three-Bond and duct tape (classy…I know). With no hose stash, and being a long ways away from a parts/etc. store, I decided to make the same fix again and add some abrasion resistant material to the pipe so it wouldn’t happen again on this trip. Surprisingly, it held the remainder of the trip.

We rolled into K-Falls and hit the NAPA auto parts parking lot. I dissasembled the overdrive valve body and found that the Splitter Clutch Exhaust Valve Spring had broken in two, possibly related to the sudden shift. This spring was in-tact when I checked it in Corvallis, OR, so I rigged up some spacers and whatnot to attempt to regain normal spring length. (This never did function again even after 5 more adjustments stretching and spacing the spring to try and find the magic spot). I also purchased some hose to repair the transmission coolant hose if it decided to fail again. I wanted to also check the rear differential fluid so I walked next door to Autozone and bought a pint of 85w90 gear oil and borrowed a breaker-bar (1/2″ drive) to remove the pipe plug. Turns out the differential didn’t need additional fluid, so we motored on to the Fred Meyers fuel station to get fuel. 67 Gallons later, we pulled out paying about $3.83/gal for fuel (not bad!).

We departed the city and headed out across Eastern Oregon, Northern California, and Finally Northern Nevada. Our only stop as the Eagles Nest Resort (for some transmission tinkering and water fill-up). We departed there after some dinner and cooler air set in for the climb up the final passes before descending into Cedarville and onto the Black Rock Desert. We hit the 12-mile entrance about 7:30-8PM and rolled into camp about 10:00PM.

Overall the trip could have gone FAR worse, but loosing OD on the way down put a crunch in the engine economy. Fortunately it failed at the most ideal time, right when we started climbing hills and would have not wanted overdrive anyway. The Cedarville pass heading down wasn’t terrible as we  had clear roads and climbed most of it in 2nd gear (locked up torque converter) between 35-45MPH. Once we hit the last little bump at the top, it kicked us down to unlocked converter ’1st gear’ and the climb was 18-22MPH. Temperature of the engine/transmission stayed cool enough that we just broke the pass at the 210F mark, and quickly cooled down as we rolled down the other side. The Jaccobs Brakes were a required piece of hardware for those passes and the result was little to no service braking needed for the entire grade. This is an outstanding feat considering many vehicles have overheated and/or lost their brakes going down these hills, only to end up in ditches or off the road. The noise of the jaccobs brakes was difficult to notice from the drivers area, and a medium rumble from the bedroom. We never had to use any emergency braking (either hand lever brake or spring brakes) and air pressure was solid for all climbs and descents.

For the PDX to BRC route, any air-brake equipped coach needs auxiliary brakes of some sort (magnetic, Jaccobs, exhaust, or some type of engine retarding. The pass out of Alturas into Cedarville and also the pass coming down into the desert just north of Gerlach, NV would be tricky. I cannot imagine the long decent at <20MPH burning air pressure constantly on/off the brakes. A suitably strong running diesel with a manually controllable downshift would also be suitable (dynamic braking). Check your slack adjusters, time your compressor to make sure it’s up to snuff, and get out your stop watch to do the decent brake timing. Google it.

A picture of the parking spot, for your pleasure. 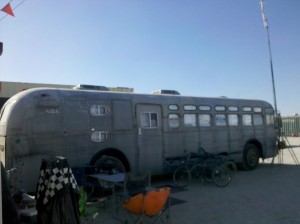 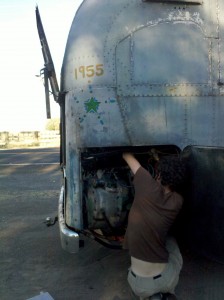